I’ve been thinking a little bit about my blog lately. Somehow, it’s not nearly as robust as I had envisioned. When I was journaling my reading and listening, I was a lot more creative and consistent about writing posts. Somehow, I’ve managed to strait-jacket my right-brain attributes and my blog has been absent a personable voice.

While it is true that I launched this blog with the sole intention of posting audiobook reviews and, that while it is unreasonable to expect an audiobook review every day; there’s nothing to say that I can’t write about some of the other cultural influences that have informed me or, about other audiobook topics.

So, I’ve decided to introduce a new feature that will appear every Friday. Flashback Friday will feature some of the items from my pre-blogging days. It might be an entry from my journal, or a relevant artifact, or even a revisitation of something I’ve already blogged about. The tenor of Flashback Friday will be less formal, more “journally” and, hopefully a little more fun 😉

Before iPhones with their “Notes” app, before goodreads.com and other social book groups that feature ways to catalogue your titles, before even my Word .doc scrapbook/journal of entries, there was The List. It was a slip of paper torn from an AudioFile Magazine notepad. It featured the titles of books I wanted to read, hastily scrawled and, folded into the coin section of my wallet. I created the list so that when I walked into a bookstore, I would not be overcome by plentitude – like a Soviet Russian in an American grocery store – and forget what I came in for. I would have direction, a purpose that would guide me through my exploration of the retail and library stacks. It served as a compass, allowing me to browse; but not quite so aimlessly!

I recently unearthed The List, in all its tattered glory during a home office excavation. I couldn’t believe it was still around! 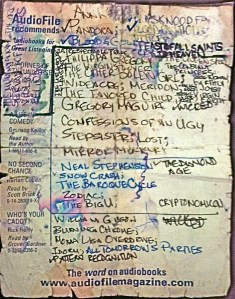 And you, how did you track your reading in the 20th century?

by Carl Hiaasen
narrated by Lee Adams
Random House Audio, Inc.
11.50 hours
What is it about Florida that inspires writers to create kooky characters? Is it the heat? Is Florida the unofficial sanctuary of eccentric people, both fictional and real? Perhaps the natural landscape throws human absurdities into sharp contrast. Maybe it’s Carl Hiaasen himself, who has created a world of quirkiness, that has given other authors implicit permission to set their respective eccentric characters in Florida. Hiaasen has been inculcating a world of idiosyncratic fictional personae for nearly a quarter of a century, set in the back waters of the peninsular state and, brings to mind other Floridian authors and humorists such as Elizabeth Stuckey-French (Mermaids on the Moon and The Revenge of the Radioactive Lady,) Paul Levine (the Solomon vs Lord series) and, Jeff Lindsay (the Dexter series.)
In Nature Girl, Hiaasen delivers, as expected, an offbeat cast of characters, including Honey Santana, a single mom who designs an elaborate payback for a telemarketer who not only calls her during her dinner hour, but who also calls her an offensive name. The vendetta serves as the main story line to which a number of farcical sub-plots become entangled – all threads coming to a denouement on the appropriately named Dismal Key in the Everglades.
But for all the experience Hiaasen has had in developing the funnily unconventional plots and casts of characters playing out their dramas in the Sunshine State, Nature Girl falls flat. The kookiness has become something of a Hiaasenian trope. Because comedy requires a straight man or at least a straight context with which to be most effective, the comic aspects of Nature Girl are all too familiar and, as a result Nature Girl just isn’t funny enough. When everything is depicted as absurd, nothing is.
Lee Adams delivered the material in a clean, clear, even pace. Her delineation of characters was well done, especially the role of Louis Piejack, a walking, rotting corpse of a man (both physically and morally) who stalks Honey. However, the novel seemed a bit overlong, never a good thing if the title is supposed to be light and breezy, which indicates that a faster pace and a better sense of comic timing is called for than what was delivered.
Other Stuff: I borrowed a library CD edition of this title from a public lending library.
This book qualifies for the Where Are You Reading? Challenge hosted by Sheila at her blog, Book Journey. Nature Girl is set near Everglades City in Florida.
View dogearedcopy map 2011 in a larger map 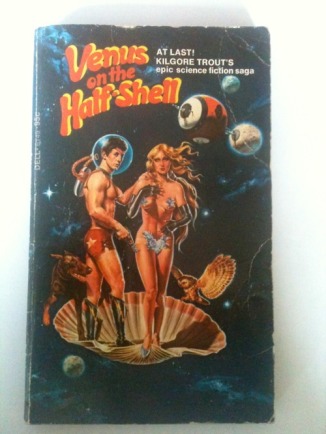 Where are You Reading? Challenge
Hosted by Sheila at her blog, Book Journey
I am totally grooving on finding books set in certain states! I’m being exposed to books that I might not have otherwise tried and, finding out more about the places has been interesting and fun. Sadly, I’m making no dent in my TBR stacks, so maybe that’s a challenge for next year!
AK – Caribou Island (by David Vann; narrated by Bronson Pinchot)
After the SNAFU involving “The Call of the Wild” (not really set in Alaska) I grabbed this title, even after so many people “warned” me about it. My recommendation: Read/listen to the book for David’s Vann’s writing and/or Bronson Pinchot’s well imbued narration; but don’t expect a fairy tale ending.
AR – Shakespeare’s Landlord (by Charlaine Harris; narrated by Julia Gibson)
In an effort to avoid reading a book about Bill and/or Hillary Clinton, I seized upon this book by Charlaine Harris, though making doubly sure there were no vampires in the story. It was okay. Just okay. Yeah, that’s me, full of faint and damning praise

CA – When the Killing’s Done (by T.C Boyle; narrated by Anthony Heald)
This is the fictionalized account of an environmentalist and the war he waged against the Park Service over efforts to eliminate non-native species from Anacapa Island off Oxnard, California. As I worked on the audiobook production of this title, I technically cannot review it; but I will say that my favorite chapter was the story of Anise (“Chapter 6” I think.) This chapter reads like a novella in the middle of the book. It’s exquisitely poignant.
[googlemaps https://www.youtube.com/embed/ryFvrjhI3Pk?rel=0&#8243; allowfullscreen=”” width=”500″ frameborder=”0″ height=”349″>
Also, this ☞☞☞ A podcast produced by Blackstone Audio featuring the narrator of When the Killing’s Done, Anthony Heald and, the author, T.C. Boyle. I did not work on the podcast in any way, shape or form and will derive no compensation, either in terms of cash or services or, good will as a result of providing a link to the podcast 🙂

I had The Silver Rush Mysteries (by Ann Parker) on hand; but in the interest of time, I elected to pick up Columbine instead. I had heard that it was good and a “Must Listen;” but quite frankly I wasn’t all that sure that I was interested in an account of that day. I decided to listen to the first CD and then decide on whether to go on with it or not. Less than 4 days later, I had managed to listen to all 14+ hours. Really, truly, a “Must Listen.”
CT – Deep Down True (by Juliette Fay; narrated by Robynn Rodriguez)
This is the story of a newly divorced woman who finds herself embroiled in drama that illustrates that, though we may get older, the underlying social mechanics of finding out where we belong and our sense of self are as challenging as ever. I worked on the audiobook production of this title too, so no real review. The book did have me running home and talking to my daughter about body image and showing her how photographers Photoshop images of models. There are a lot of YouTube videos out there; but this one remains one of my favorites, ironically produced by Unilever/Dove Soaps: Model Evolution with Makeup and Photoshop
DE – West of Rehoboth (by Alexs D. Pate; narrated by Dion Graham)
Wow, I had no idea that finding an audiobook set in Delaware would prove to be so hard! I thought there would at least be something out there on the DuPonts; but apparently not! After West of Rehoboth was recommended to me, I ended up finding and buying a used library CD copy. Since I bought this audio soley on the premise that it was set in Delaware, I had no idea what to expect. It’s a novel with a bit of a mystery, Black History and even a little magic. Maybe not necessarily for the young adult audience despite its fourteen-year old protagonist.
BTW, still on the lookout for sugar-based Pepsi or Coke!
HI – Unfamiliar Fishes (by Sarah Vowell; narrated by Sarah Vowell and featuring the voices of
Fred Arminsen, Bill Hader, John Hodgeman, Catherine Keener, Edward Norton, Keanu Reeves, Paul Rudd, Maya Rudolph and, John Slattery)
This is the non-fiction account of the U.S.’ acquisition of territories in the 19th century, focusing on Hawaii. I’ve cheerfully and eagerly checked out the YouTube links of the book trailers and Sarah Vowell’s
interviews on the late night talk show circuit; but a little Sarah Vowell goes a long way

She is funny and smart and, because there are some personal takes in the book, I can see why casting her to read her own book would be a plus; but she has a distinctive voice that can wear a little thin after a short time if you’re listening for more than the novelty of Sarah Vowell herself. I admit that sometimes I reflexively tuned her out, so that I had to rewind to catch what I missed; but it’s worth it to catch a really fun and fascinating part of U.S. history that you probably weren’t taught in school 🙂
View dogearedcopy map 2011 in a larger map