Sheila, over at Book Journey, is hosting a Harry Potter Read-Along! The first title in the series, Harry Potter and the Sorcerer’s Stone was covered from November 1-16, 2014, and last night I capped off having previously listened to the audiobook in 2007 and in January 2014, and having read the paperback over the past couple of weeks, by watching the movie with a good friend, @lithousewife via TweetChat. Below is a composite of quotes from the book, my tweets (@dogearedcopy) from last evening (time stamped Pacific Standard Time,) and some film clips, etc. Even though most, if not all those reading this have read the book, I didn’t include spoilers. The read-along is a lot of fun and runs through March 2015. It’s still open to all who who are interested in reading or re-reading the Harry Potter novels!

Borrowed it, Professor Dumbledore, sir,” said the giant, climbing carefully off the motorcycle as he spoke. “Young Sirius Black lent it to me. I’ve got him, sir.

Aunt Petunia obviously scented danger, too, because she said quickly, “And we’ll buy you another two presents while we’re out today. How’s that, popkin? Two more presents. Is that all right?”

Mr. Dursley was the director of a firm called Grunnings, which made drills.

“I AM NOT PAYING FOR SOME CRACKPOT OLD FOOL TO TEACH HIM MAGIC TRICKS!” yelled Uncle Vernon.
But he had finally gone too far.

He passed a round-faced boy who was saying, “Gran, I’ve lost my toad again.”
“Oh, Neville,” he heard the old woman sigh.

Oh you may not think me pretty,
But don’t judge on what you see,
I’ll eat myself if you can find
A smarter hat than me.
You can keep your bowlers black,
Your top hats sleek and tall,
For I’m the Hogwarts Sorting Hat
And I can cap them all.
There’s nothing hidden in your head
The Sorting Hat can’t see,
So try me on and I will tell you
Where you ought to be.

You might belong in Gryffindor,
Where dwell the brave at heart,
Their daring, nerve, and chivalry
Set Gryffindors apart;
You might belong in Hufflepuff,
Where they are just and loyal,
Those patient Hufflepuffs are true
And unafraid of toil;
Or yet in wise old Ravenclaw,
if you’ve a ready mind,
Where those of wit and learning,
Will always find their kind;
Or perhaps in Slytherin
You’ll make your real friends,
Those cunning folks use any means
To achieve their ends.

So put me on! Don’t be afraid!
And don’t get in a flap!
You’re in safe hands (though I have none)
For I’m a Thinking Cap!

Three times a week, they went out to the greenhouses behind the castle to study Herbology, with a dumpy little witch called Professor Sprout, where they learned how to take care of all the strange plants and fungi, and found out what they were used for.”

“I’ve just thought — Hermione.”
“What About her?”
“She Doesn’t know about the troll.”

“Aha!” said Harry, “so there’s someone called Nicolas Flamel involved, is there?”

Ron also started teaching Harry Wizard chess. This was exactly like Muggle chess except that the figures were alive, which made it a lot like directing troops in battle. Ron’s set was very old and battered. Like everything else he owned, it had once belonged to someone else in his family — in this case, his grandfather. However, old chessmen weren’t a drawback at all. Ron knew them so well he never had trouble getting them to do what he wanted.

“Hagrid, you live in a wooden house,” she said.

The ancient study of alchemy is concerned with making the Sorcerer’s Stone, a legendary substance with astonishing powers. The Stone will transform any metal into pure gold. It also produces the Elixir of Life, which will make the drinker immortal.

“That is because it is a monstrous thing, to slay a unicorn,” said Firenze. “Only one who has nothing to lose, and everything to gain would commit such a crime. The blood of a unicorn will keep you alive, even if you are an inch from death, but at a terrible price…”

“Be warned, Potter — any more nighttime wanderings and I will personally make sure you are expelled. Good day to you.”

The “Tzadikim Nistarim” are the 36 hidden righteous people of the earth according to Jewish mystic tradition. None of the 36 people self-identify as being good or righteous, but their actions have the effect of being socially just or averting a greater humanitarian disaster.  If all the Tzadikim Nistarim are eliminated, humanity is doomed. In 2009, a number of seemingly unrelated deaths span the globe, and one man – an Italian police detective named Tomasso di Barber in Venice, makes the connection: Someone is killing the righteous people of the world. And so begins this international thriller that races against the clock to identify and secure the eponymous man of the book.

The Last Good Man has all the makings of a great thriller: a touch of the occult, international settings, deadlines with dire consequences if not met, spiritual musings,  flawed protagonists, and an elusive villain… and yet, it all falls a bit flat. The novel’s arc is robbed of tension with its schizophrenic quality: Is this going to be a police procedural set in Italy? Or is it going to be a Scandinavian crime thriller ? Is the whole of the novel supposed to be a sort of modern, metaphorical, Talmudic commentary? A.J. Kazinski seems to have mashed three novels into one, supplying the listener with an overabundance of detail and sub-plots (e.g. eighty cents, Skype sex, an Arab terrorist, an architect…) that do nothing to advance the story and worse, weaken the overall narrative until it collapses into a series of anti-climactic events.

Simon Vance is the British-American narrator who brings his BBC4 polish and credentials as a reader of international thrillers (e.g. The Millennium Trilogy – by Steig Larsson) to The Last Good Man. His reading is clear, the pace steady, pronunciations are consistent, all characters are delineated well and credibly… all the things that listeners have come to expect as de rigueur from a seasoned professional such as he.

OTHER: I dnloaded a digital copy of The Last Good Man (by A.J. Kazinski; narrated by Simon Vance) from downpour.com. I receive no monies, goods or services in exchange for reviewing the product and/or mentioning any of the persons or companies that are or may be implied in this post.

Sheila, over at Book Journey, is hosting a Harry Potter Read-A-Long that launches today! The feature runs through March 2015 and is open to all who who are interested in reading or re-reading the Harry Potter novels!

Interestingly, I had made it a personal goal of mine this year to listen to all of the Harry Potter novels; however, I only got as far as the fourth book in the series, Harry Potter and the Goblet of Fire. I had planned to pick up Harry Potter and the Order of the Phoenix in January, which works out perfectly as that is when the Harry Potter Read-A-Long will be covering the fifth book! I may be relatively quiet until January; but I’ll be lurking nonetheless (Think of me as wearing an invisibility cloak for a bit!)

I’m not a Millennial who grew up on Harry Potter, so my perspective and appreciation as an older reader diving into the works for the first time is going to be different; but I’m game! I have all the Harry Potter movies on hand as well. I’ve been watching the corresponding movie after finishing each audiobook, and if there is interest, I’d love to do a live tweetchat of the movie after every period. For instance: Harry Potter and the Sorcerer’s Stone/Harry Potter and the Philosopher’s Stone is scheduled in the read-a-long for November 1-16, 2014. Viewers would get their copies of Harry Potter and the Sorcerer’s Stone (starring Daniel Radcliffe) on or about November 16, open up a tweetchat account (makes it easier to track the hashtags through the evening) and comment on the movie in progress. If you’re interested, let me know either in comments or on twitter (My twitter name is @dogearedcopy.) The hashtag for the read-a-long on twitter is #hpreadalong 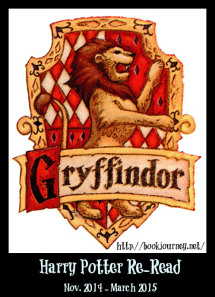