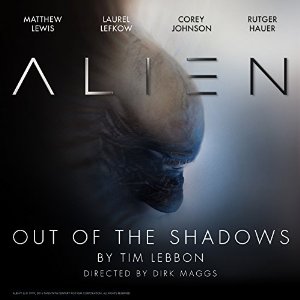 Alien: Out of the Shadows: An Audible Original Drama
Based on the Novel by Tim Lebbon
Adapted and Directed by Dirk Mags
Performed by a Full Cast:
Corey Johnson as Hooper; Matthew Lewis as Baxter; Kathryn Drysdale as Sneddon; Mac McDonald as Lachance; Andrea Deck as Kasyanov; Nathan Osgood as Welford; Abdul Salis as Powell; Regina Brandolino as Garcia; Barbara Barnes as Jordan; Tim Alexander as Vic and the computers; Laurel Lefkow as Ellen Ripley and; Rutger Hauer as Ash
Music by James Hannigan
Ⓟ 2016, Audible Studios
4 hours, 31 minutes
SCIENCE FICTION | SPACE | HORROR

This is an audio adaptation of the first of three novels that take place between the time frames of the movie, Alien and the sequel, Aliens. Ripley’s escape shuttle has been adrift for thirty-seven years when it’s picked up by by Chris Hooper’s mining ship, DSMO Marion – which is held together with a wing and a prayer; and they all find themselves disabled on LV-178, a small planet with a seemingly abandoned mining colony on it…

The story uses a lot of the scene and plot devices created for the 1979 movie,  Alien   (directed by Ridley Scott); and in many respects listeners may feel that nothing new has been added to the cannon knowledge of the Alien universe; but Lebbon’s story does offer a possible explanation as to why the xenomorph aboard the escape shuttle at the end of the movie just lies there in the bulwarks; provides an interesting context for Ash’s semi-resurrection; and gives a nice “out” as to why this story wouldn’t be referenced in any of the movie sequels. However, the horrific aspects of the story are reduced to chase scenes, figuring out to deal with decompression chambers, and warning & reminding each other frequently of a variation of  “Acid burns! Watch out!” The story does offer an enticing peek at another civilization, but it does not look like it will be developed into future storylines.  Also, there was one scene in which the new crew is informing Ripley of all sorts of things about the xenomorph which they couldn’t possibly know, unless they saw the first movie!*

Laurel Leflow voices Ripley so well, it sounds like Audible has spliced in film dialogue; and Rutger Hauer voices the modified Ash character credibly as well. Most of the  other actors pass muster too, though the character of Lachance is, of all things, Cajun, and that’s just not one of those accents that really be played convincingly or not sounding comically bad.

The production has original music and sound effects. The music is gorgeous, adding atmosphere. The sound effects are a little heavy-handed at times; but always clearly indicating the action. Alien: Out of the Shadow: An Audible Original Drama doesn’t quite have the balance and finesse of a BBC production; but Alien fans will undoubtedly connect; and those for whom Rutger Hauer is a draw will not be disappointed.

* It is not clear if this a continuity error that exists in the original novel as I haven’t read it yet; or if it is one generated by adapting the novel into a play script; or if I’ve somehow completely missed the rationale… If you can explain, please let me know in comments!

OTHER: I listened to a digital download copy of Alien: Out of the Shadows: An Audible Original Drama (By Tim Lebbon; Directed by Dirk Mags; Performed by a Full Cast) which was available free during the month of April, 2016 from Audible.com. I receive no monies, goods, or services in exchange for reviewing the product and/or mentioning any of the persons or companies that are or may be implied in this post.

Alien: Out of the Shadows: An Audible Original Drama (By Tim Lebbon; Directed by Dirk Mags; Performed by a Full Cast) is a finalist in the 2017 APA Audie Awards in the Original Work category and in the Audio Drama category. 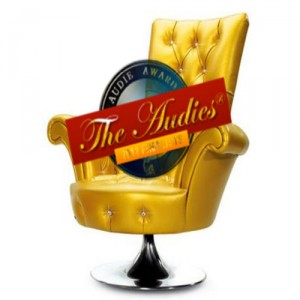 4 thoughts on “Audiobook Review: Alien: Out of the Shadows: An Audible Original Drama”